Veterans Visiting Veterans volunteer Sandra Simmons and MJ Scarpelli of VITAS Healthcare participated in the First Annual Awards and Recognition Ceremony for the Greater Naples Fire Rescue District on February 12,2016. VITAS, a major sponsor of the event, had a sponsor’s table set up which was shared with the VVV group to connect with the firefighter who are also veterans. 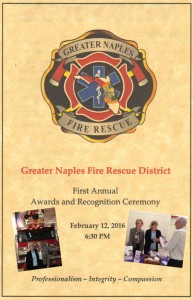 There ceremony began with the Presentation of the Colors led in by the Greater Naples Fire Department’s veteran bagpipers, the Pledge of Allegiance, the Invocation and a heartfelt welcome by Fire Chief Kingman Schuldt and Fire Commission Chair Jeff Page. 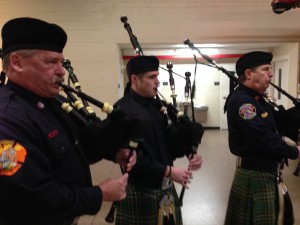 Sandra reported, “There was an impressive number of firefighters and even civilian staff who received awards for service above and beyond the call of duty, and it is evident by the tenure of the firefighters that their dedication to their jobs is long-lived. Meeting the firefighters, many of whom have received commendation medals, medals for heroism and Eagle/Phoenix awards, it was not surprising that many of the firefighters are veterans, and that all of them are dedicated to what they do. It is a very impressive team that protects us here in Naples, Florida.”

One thing that everyone was super excited about was the long-awaited “Big Red” the new ladder truck that reaches 107′ in the air had just arrived the day before the ceremony. Everyone, including our VVV volunteers had their picture taken with Big Red. It is an impressive addition to the equipment arsenal that keeps us safe. 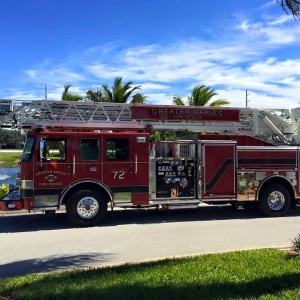 Many thanks to Kingman Schuldt, Fire Chief, and his Executive Administrative Assistant, Nicole Chesser, for their warm reception of the Veterans Visiting Veterans group and the suggestion that we participate in their 2016 Veterans Day celebration and ceremonies this coming November.